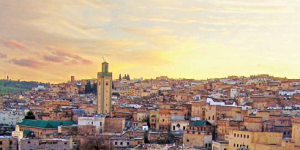 How do you plan a trip when you don’t expect to visit a place again and have just one week.  You want to get at least the flavor of an entire country without running around  like a mad goose after a guide waving a pennant on a stick.

Morocco has been on our list for a long time and our plan, which worked perfectly, was to book several private tours.  We’re generally not suited for group tours and private tours can be very expensive.  But in Morocco, where prices are less than in much of Europe, it was all more or less affordable.  The advantage is the we were with our guides and hosts for almost 40 hours over the week and had the chance to have a wide ranging converstaion with them.  We generally avoided contraversial topics, just asked them questions ab0ut Morocco and their lives and let them talk, which they did with enthusiasm.

We had a guide for an all day tour of Marrakech.  Then there was an all day cooking class at a orchard outside of the city.  We  rented a car and drove from Marrakech, staying in Essouria on the Atlantic coast for two nights. But best of all, was a two day tour of the  Sahara Desert.  I told my Moroccan friend about the trip, he said, “well you pretty much covered all the bases.  Fez is certainly worth the visit, but you did good.”

Disclaimer:  We were here in the third week of September.  The temperature was in the high 70’s to low 80’s.  Three weeks previously we saw reports of temperatures around 107.  I have no idea what any of our experiences would have been under those conditons.

Les Jardins de la Medina
We loved this place.  It might have moved up to being our favorite hotel, our last favorite hotel, on the Turkish coast, now closed.  The main buildings of the hotel had been home of a prince in a country where they take that prince thing seriously. 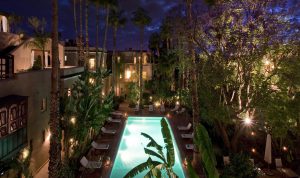 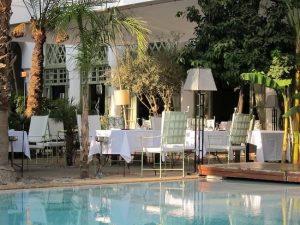 We came and went during our stay and stayed in three different rooms at different rates.  All, including the least expensive, were very good.  We ate a lot at the hotel, partly because it was easy, in a beautiful setting but mostly because the food was so good.  Nadal, one of the waiters, was there most meals and took good care of us.  We had one very early departure.  At 5 am, in the dark.  We came down and found a table for two in the otherwise dark garden in the glow of a tableside lamp. 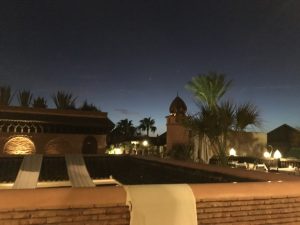 Another Riad not far from Les Jardins.  The high point, a rooftop restaurant, especially at sunset. 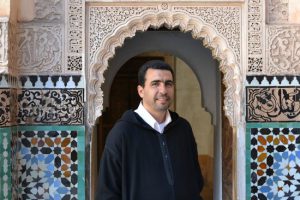 Abdul gave us a very good, running commentary on Marrakech, Morocco, Islam and life as we walked.   He isn’t an employee of some tour company but an independent guide who has figured out how too make it work as a rare independent through the internet.  He described his long journey to secure his guide license which was no small feat.  Abdul is an educated observant Muslim, and it was fascinating to hear his perspective.  He defended the faith, blamed media for bad impression of Islam in west and defended polygamy and Turkish president, Erdogan.  We flet no need to be arguimentative but just listen, which led him to talk further.  We had lunch at a charming cooking school art gallery,  and restaurant.  Palias de la Bahia was the highpoint and Abdul was very knwledgable  It gives one at least some insight into a Sultan’s life and culture. 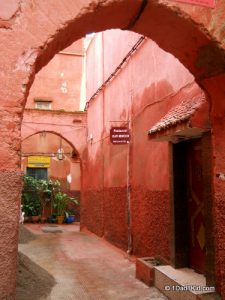 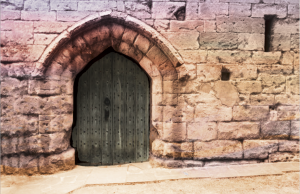 The most striking thing about Moroccan architecure is the blank exterior of most buildings, very little curb appeal.  The monuments, the houses are all surronded by unadorned walls with unassming doors.  In most houses, the front door opens on to a passage that takes a few turns so no passerby can see more than a few feet into the dwelling, we are told to protecty the security, privacy and peace of the home.  Whole towns are collections of blank adobe walls.  The Palias de la Bahia and the Ben Youssef Medresa, where you can gain entrance, are exceptions. 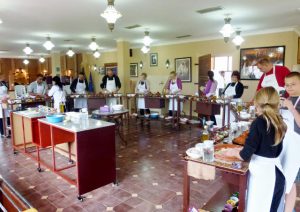 Our host, Michele arrived shortly after us, in purple shorts, T-shirt and an uncombed mop of grey hair, as if he had just rolled out of bed, which he probably had. The venue is  a large bright room on a farm outside Marrakech, Michele and his wife have created a quiet refuge to relax and learn about Moroccan cooking. He is an expat Frenchman who tired of the business of Europe and moved to Morocco to start this cooking school.  He was fortunate enough to have married a beautiful Moroccan woman who, unlike her husband,  is actually a chef. 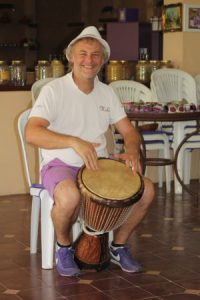 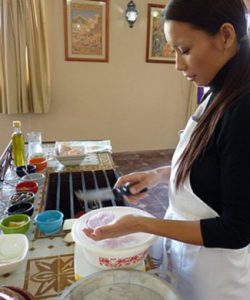 Michele’s role is the greeting, an informative blind spice identification test, breaking out in drumming while we prepared our Tagine and a charming discussion over our lunch.  It was his wife who did all the cooking with skill and patience. 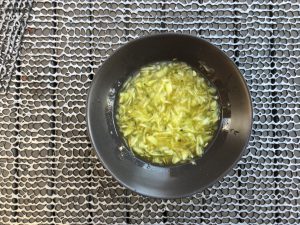 Is this a salad or a soup?  Whatever it is, it’s  a delightful light start to a meal and good counterpoint to the heavier Moroccan dishes.

Mix the juices together and add the sugar a bit at a time and test for sweetness.  Stir until the sugar is dissolved.  Pour over the cucumber and chill.

Still in the test kitchen:  best way to cut the cucumbers, does it get better if it has time to sit?  Adjust proportions, more or less sweet.

We are fortunate enough to live a few blocks from Oaktown Spice Shop, one of the best spice shops I have ever seen.  But where do you get orange flower water.  If you plan ahead, mail order on-line, or surprisingly BevMo, but check, not all stores have it in stock.  Or if you’re standng in the kitchen, out of  time, try a substitute. 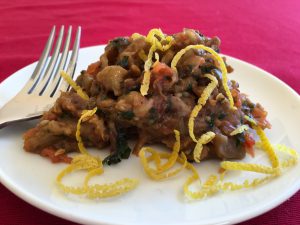 Peel eggplant and cut into small chunks
Add three crushed garlic cloves
With a little oil, cook over medium heat for 15 minutes or until soft.
Skin tomatoes and cut into small pieces.  With a little oil, simmer with pepper, cumin, paprika and salt until juice is reduced, then stir in tomato paste. (try adding a little lemon juice)
Combine eggplant and tomato mixture and add chopped parsley & cilantro
Mash with a potato masher.  Salt to taste.
Makes 2 ½ to 3 cups of salad
There is no magic here, you can vary the proportions of eggplant and tomato depending on your own taste.
Serve hot or cold.

Essouria is a UNESCO World Heritige site on the Atlantic coast.  It is a walled city with beautiful winding streets and nearby beaches.  The market and shopping was far less intense than in Marrakech and we found that more enjoyable for wandering .  We had a great time with a spice dealer who provided medicinal spices as much as cooking spices.  We bought some small carpets as well.

The city has a vibrant fishing port and one of our best meals was at the port where we stepped up to a large counter or fresh from the sea fish and picked out our meal which was grilled and served in minutes.

A restaurant of special note was La Tabla by Madada housed in a beautiful arched cellar which kept it cool. 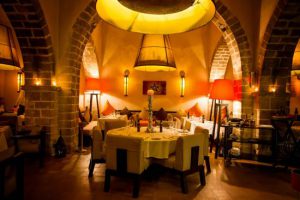 I wrote a separate post – A Brief Visit to the Sahara Desert – about this two-day adventure but it’s worth praising them just a little more.  The experience couldn’t have been better.  Moha in the office worked really hard to craft an unusual request and put together a great tour.  Good job!!!