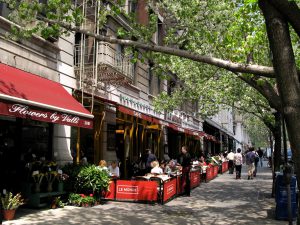 We’re happy that we’re able continue our annual two-week stay in New York in May each year.  Each time, we visit, New York feels more like home.  For those not accustomed to New York, this might be a good starting point for planning your visit.  For old hands, maybe a few new ideas or reminders of places to revisit.  Click on the links in blue for more about each place.  Susan, as usual, was the Ring Mistress if this trip.

We chose four plays rather than just going to see Hamilton for $1,000.  That was probably a mistake.  We only ate at one “name” restaurant, Babbo, a regular stop for us, rather seeking out places with entrée’s in the $20’s not the $30,s or more.  We encountered a wide range of museum exhibits.

We were busy the first week and less so the second.  We didn’t get up and out so much in the morning, more like home.  And walked – 90 miles over 14 days.  Only took cabs to and from Penn Station and to the Met on one rainy day.

Over two weeks we visited 11 museums and libraries, viewing both special exhibits and works from the museum collection.  I can hardly begin to describe these shows, so click on the links to see more about each museum and exhibit. The depth and breadth of what we were fortunate enough to see in just two weeks was wonderful and probably not possible in any other city in America or maybe the world.

The Metropolitan Museum of Art

Housed in the former home of Henry Clay Frick, turn of the centruy steel industrialist on the Upper East Side.

The Whitney Museum moved from it’s upper west side location several years ago to a site on  the Hudson River in the Meatpacking District at the southern end of the High Line.

We visited the newly renovated Main Reading room open after two years work.  As a way to experience the room, rather than just walk in and out, we both picked out books from the shelves, Minoan Archaeology for me and an Encyclopedia of Ancient Greek for Susan and read for an hour. Then we walked and shared all the arcane information we had just learned.

Part of the Smithsonian, the Cooper Hewitt has a unique interactive presentation with electronic wands that allow visitors to record their visit and view their selected pieces on line later.

You have to take the tour which has limited room and cannot be reserved, so arrive early.  Sign up and go for a snack.

We didn’t visit the museum this trip but managed to talk our way into the gift shop, which is inside the museum.  Three stories of interesting stuff.  If you visit the museum, be sure to leave time for to explore the  shop. 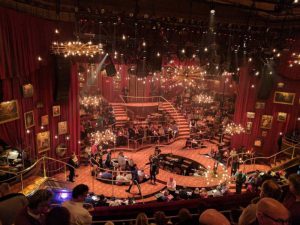 On our last subway ride home, we gave our weekly metro passes that still had some valid days to people on the platform.  I interrupted a young couple in an embrace.  They took the pass, smiled, thanked me and resumed.