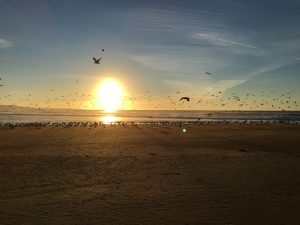 If you’re going Kayaking on the Elkhorn Slough, nobody goes to Marina.  Maybe because it has always just been known as the military town adjacent to Fort Ord, not a vacation destination.  Closed in 1994, this massive military base occupies a five-mile stretch of the California Coast just north of Monterey and extends over 280,000 acres.  In its later years Fort Ord was a major base of the 7th Infantry Division used for basic training for thousands of US troops heading for Viet Nam.

In the 60’s and 70’s I drove along the coast countless times in my VW bus sporting obligatory long hair and a beard.  You could see the troops at the rifle ranges in the dunes and hear the shots from the road. 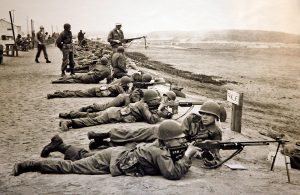 It was an uncomfortable collision of competing cultures of the time.  In contrast to earlier times when passers by most often had a feeling of pride at our strong military, many of us on the road had mixed feelings of distaste and anger at the military and an unjust war, mixed with pity for our comrades who were there, snared by the draft.  I was recently describing this to a friend who did their basic training at Ord, and he said that they shared a reciprocal reproach and wistful jealousy at the free wheeling VW bus denizens.  I am not sure just what fantastic adventures they thought we were up to but we certainly did try to meet their expectations.

The site is now occupied by 10,000 acres of the Fort Ord National Monument.  Only 4,000 acres are open, with the other still in the process or ordinance clearance.

But on our first trip, in February, we splurged and stayed in Marina at The Sanctuary Beach Resort in a little cottage overlooking the sea and were tempted back the next December by a low season discount. 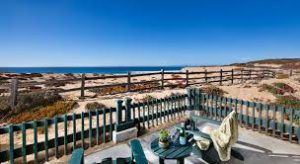 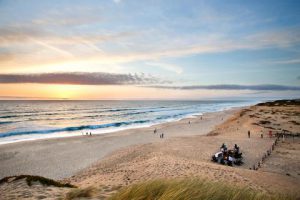 It was still during the California drought, so the winter weather was wonderful.  The special attraction is that they give each guest a golf cart.  Cars are parked out of sight at the main lobby.  Susan was our designated driver for the Grand Prix de Sanctuary.

The following August, we took out two grand-daughters back for a long weekend to visit the Monterey Aquarium, the Elkhorn Slough and the beach at Sand City, known for sea glass, a favorite of the kids.  This time we stayed at a below average Best Western Hotel across the street from the Sanctuary, no more than a place to sleep and precious little of that, sharing a room with a 5 and 7-year old.

At one edge of town is, a 17-acre wetland park and library past which runs a bike route that starts in Castroville, eight miles to the north and runs all the way to Pacific Grove 15 miles to the south. We have on good authority from a couple biking down the path that the Marina Library has the best bathrooms on the route 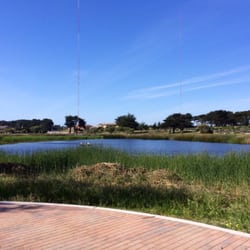 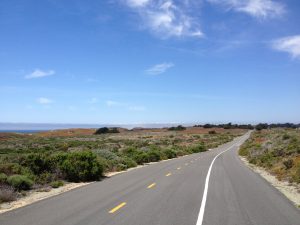 From the Marina State Beach, you can access a 12-mile stretch of untouched and almost deserted beach with huge dunes stretching from the mouth of the Salinas River in the north, past Marina and the length of the old Fort Ord to Sand City in the south.

We are only beginning to explore the entire stretch of beach.  On our last trip we hiked up the beach north to the Marina State Park for almost two miles.  As we walked on, there were fewer and fewer foot prints and signs of civilization

We rounded a bend and discovered a man-made inlet carved out of the coast by a sand dredging operation. 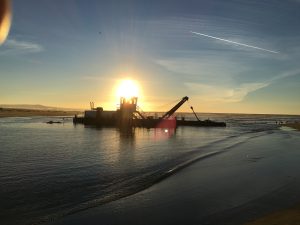 There was an almost derelict dredge barge, half awash in the surf, tethered to the land by huge long lines that carved strange patterns in the sand as the barge moved in and out.  The sand was carved in ledges exposing red sand layers below the soft white beach sand and the entire area was littered with steel scoops, pipes and floats like the bones of some not so long dead dinosaurs.  The inlet was a gathering point for hundreds of gulls who burst into the air as we passed by.  Just over the dunes we could see the active stack of the sand operation, with a spout of steam, in contrast to this abandoned beach operation. (March 2017 update:  This isn’t derelict at all but rather a controversial sand dredging operation.)

On the way back we walked down the beach as the sun set; a quiet winter sunset.  And as we neared our beach, a pod of humpback whales was feeding just 50 yards off the beach just beyond the breaker line. 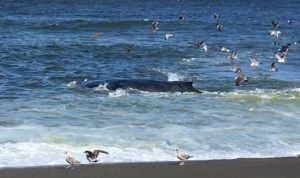 When we finally got back we stopped by a beach fire and enjoyed the last light of the sunset along the shore.  Can you say more about this amazing California treat of seeing whales so close up and down the coast?  It was exciting, but  writing doesn’t capture that as well as the smiles on the faces and the whoops when a whale breached.

There really aren’t many options.  Even the Kula Ranch Restaurant adjacent to the Sanctuary closed and it was none to good when opened.  Dishes Bistro and Grill, in town, was very good when we visited but has since closed.  Like I said, nobody goes to Marina. Here is what we found.

Coffee Mia – Horace Mercurio, the owner, holds forth at Coffee Mia saving you from yet another teenaged barista.  Coffee Mia seems to be the social center of Marina, where it seems like everybody is a local and even if it is your first visit, Horace makes you feel like a local, welcoming you into his living room.  He greets his friends, shares jokes and takes phone orders from regulars whose number he recognizes.  “Hey Rick, your regular?  Yeah It’ll be ready in ten.”

Horace wears baggy black pants with white strips and a black chef’s shirt over a white T-shirt.  At first glance it looks like a clerical collar. When I made that comment, he immediately crossed himself and chanted, “In nomine Patris, et Filii, et Spiritus Sancti.  A blessing on you both.”  He continued, “As for confession, I am game if you are.”  When I suggested that he might be shocked at my confession, he responded, “There isn’t anything that I haven’t’ done or at at least thought of doing.”  He had been down this road before and I was more than happy to play his straight man.

Tico’s – As a little change-up from Coffee Mia, Tiko’s is a small breakfast and lunch café with good solid food and interesting specials.

Mountain Mike’s Pizza – This is who the staff calls for their dinner.  We arrived at our room overlooking the sea, found robes, cuddled up and ordered a Mountain Mike’s pizza which was delivered to our cottage.  We watched the Golden State Warriors dismember the San Antonio Spurs.  Quite exciting for AARP people who don’t even own a TV and especially for Susan, a mad Warriors fan taking a break from a lactose-free diet. Downing a mouthful of cheese and sausage pizza, she says, “This is the best fucking day of my life.”

Michael’s Grill and Taqueria – There may not be anything special about Michael’s  but we had been hiking at Fort Ord for hours and were ravenous.  As we passed through town, saw their sign and were delighted with our burrito and a beer, sitting at the outdoor table.  The young men who served us were delightful and friendly.

The real compelling reason to visit is the Elkhorn Slough.  What is a Slough? 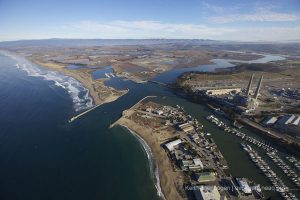 While many bodies of water or damp places can be called a slough, the Elkhorn Slough is one on the most notable slough systems in the Western United States if not the nation and certainly worth a stop or a day or two.

Renting a kayak and gliding up the slough is a great experience and the best way to get an up close look at the area wildlife.   I want to repeat this.  It really is a wonderful outing, on the water under the soft California sky and all the wildlife, especially entrancing if you have never been up close to those wonderful sea otters.

We used Kayak Connection right on Highway 1 south of the bridge. 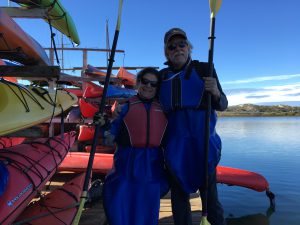 You can go solo or with a group so it works for any experience level. It’s about a 3-hour event, or more if you linger on the water.  You’ll see a fabulous variety birds, gangs of sea otters, seals and sea lions and more. 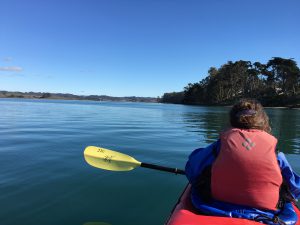 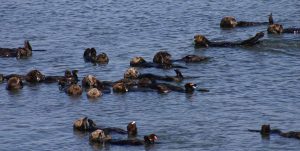 Here are some tips to make the trip more enjoyable:

With that crying child in mind when we took our grandchildren 5 & 7 to visit the slough, we booked a ride on Elkhhorn Slough Safari. 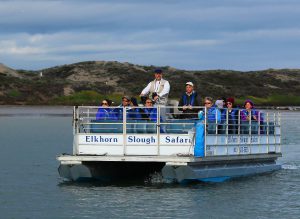 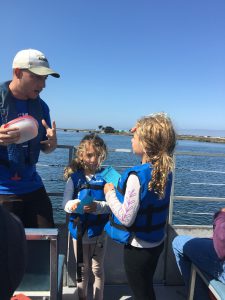 It was a two-hour gliding ride on a pontoon boat with a knowledgeable guide.  We brought water and the kids could move around.

On the ride back the 7-year old, instead of gazing at the sea birds became obsessed with the flies, putting out pieces of cookie and watching them land. Yes, she is one strange delight.